I've picked up on what seems to be some mis-information that's going about, which is that only OCA members will receive the Crown Medal from the Thai's if they award it to us. I'm sure I'm right in saying that all the Brits who served on Crown for the number of days required to qualify, will be eligible for the medal which is morally right. The Aussies and Kiwis already have their medals from their own governments. The difference between OCA members and non-members is that one of the benefits of being a member, is that OCA will be doing the admin for them. Non-members will qualify for the medal but will have to apply for it themselves. I'm sure any non member contacting us will be pointed in the right direction of how to apply. Considering the positive news about the medal situation, that Mike told us of at the AGM, I think it's best we stop this mis-information/rumour from gathering pace. Perhaps could give it to Hank so he can put it up on his Facebook group if he wishes to, as I'll be doing on the OCA group. It might also be a good idea to send it out in a round robin email?

Received by Mick Norton
From MOD 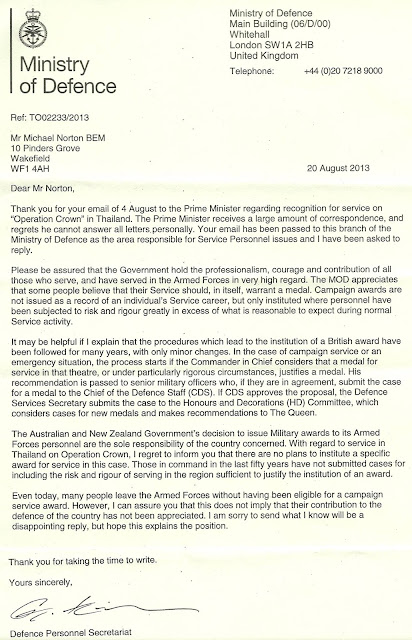 Posted by Hank Lawrence at 6:56 PM